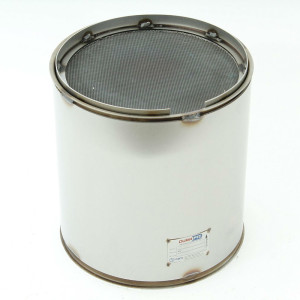 A Diesel Particulate Filter, more commonly called DPF, is used as a part of the exhaust system and traps smoke or soot produced by the combustion of the engine.

As you may have gathered by the name, the DPF is only relevant for diesel engines.

DPF technology usage first became common in North America around 2007 timeframe. For diesel vehicles older than that, it is common to see a puff of black smoke coming out of the tailpipe, particularly during acceleration.

As with any other type of filter, a DPF must be cleaned occasionally. If the cleaning does not occur, the backpressure in the exhaust will continue to build, and the engine performance will begin to suffer.

The DPF cleaning is performed automatically as a part of the engine controls and the event itself is usually unknown to the customer, known as DPF regeneration.

The regeneration occurs by an extra fuel injection that raises the exhaust temperature, usually between 600-700 degrees Celcius. Depending on the drive cycle and many other parameters, the interval between DPF regenerations may be from 200 to greater than 1000 miles.

The only real benefit to this product is the reduction of soot emissions. This reduction has 2 main benefits. The first is that this reduction allows these diesel engines to be sold. Without DPFs, it is very difficult to reach the new emissions standards introduced around 2007 without major trade-offs. The other advantage is the environmental factor of reducing particulate matter emissions.

For example, a 6.0L Powerstroke engine would require a 9 to 12 Liter Diesel Particulate Filter! These things are big.

The filter does have a maximum target capacity, which is based on 2 main factors. The first is the backpressure impact, so the filter should not become so loaded that it negatively impacts performance. The second, and main factor, is how much soot on the DPF can be safely regenerated.

If the DPF has too much soot, during regeneration the soot itself can start to catch on fire and overheat the DPF. This could result in cracking of the DPF or in some more extreme cases the result could be melting of the DPF substrate that is inside the exhaust pipe.

The exhaust pipe around the DPF is typically stainless steel for this type of exhaust system. The material of the DPF substrate can have a few options, with the most popular being silicon carbide and cordierite.

There are a number of potential problems related to this component, such as cracking and melting as mentioned before.

Another issue with using this product is the extra fuel required for the regeneration of this component. Creating the heat to allow this component to be regenerated does not come without fuel penalties. If the filter has a crack, you will begin to notice black smoke in the exhaust pipe, and the vehicle would no longer be emissions compliant.

In case of failure, the DPF can be difficult to replace. Many OEM’s deliver it as a single piece exhaust without flanges, so for these vehicles replacement would require some cutting and welding to insert the new DPF.

The introduction of the DPF was very positive in terms of improving the image of diesel engines being dirty, but it did not come without growing pains.

Adding such an invasive component to vehicles adds an immense amount of complexity that can still cause problems. With the current restrictions on the allowable amount of particulate matter, it is unlikely that the DPF technology will go away soon.